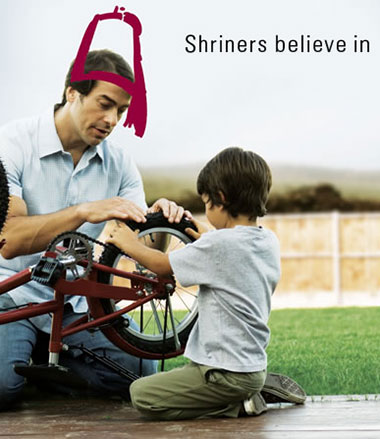 Shriners International is a spin-off from Freemasonry, the oldest, largest and most widely known fraternity in the world. Freemasonry dates back hundreds of years to when stonemasons and other craftsmen gathered after work in shelter houses, or lodges. Over time, the members organized into Masonic guilds and the tools of their trade – the square and compass – became the symbol of their brotherhood.

In 1870 a group of Masons gathered frequently for lunch at the Knickerbocker Cottage on Sixth Avenue in New York City. At a special table on the second floor a particularly fun-loving group of men met regularly. Among the regulars were Walter M. Fleming, M.D. and William J. “Billy” Florence, an actor. The group frequently talked about starting a new fraternity for Masons – one centered on fun and fellowship, more than ritual. Fleming and Florence took this idea seriously enough to do something about it.

Over time, Masonry evolved into an organization that began to accept members who were not craftsmen. Today, Masonry is built upon a foundation of improving character and strengthening communities, though the square and compass are still the symbols of the fraternal brotherhood.